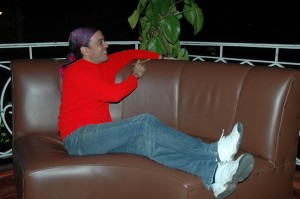 Clandestino is the latest production from famous Cuban troubadour Daniel Álvarez, former leader of the band Juego de Manos. Released by Tumi Music as a 16-track CD, this album is a clear expression of the contemporary development of one of Cuba’s most important and influential musical genres: trova. And trova runs unequivocally through Álvarez’s veins, for his native city of Manzanillo has held a very active trova cubana scene since the mid-20th century. His compositions reflect this tradition, in which peasant songs integrate socially critical and romantic lyrics with ballad-style and Cuban son accompaniments, sometimes sounding closer to the music of Spain than that of the Caribbean Islands.

Clandestino is also notable for the participation of saxophonist Alfred Thompson (Irakere) and tres master Pancho Amat, who collaborate with Álvarez in creating that magical and dramatic atmosphere that is characteristic of contemporary trova. The influence of Mediterranean sonorities is also very clear, featuring Roldán Carballoso (Buena Vista Social Club), whose presence is predominant in “La tarde” (“The afternoon”), where guitar, violin and flamenco-inspired chants intertwine to make this Cuban song a soulful product of the Spanish and African diasporas of the Caribbean. The opening track, “A mi me gusta compay” (“I like it, buddy”), is a more straightforward trova rhythm, with long verses accompanied by tres, guitar, bongos, and timbales, which then break into a montuno, or a sung call and response chorus section, which is so characteristic of Cuban music.

Excerpts of the whole album can be heard at Tumi Music’s website:http://www.tumimusic.com/David-Alvarez/Clandestino/tumi182/albums/music/

Not only is this album finely produced, with a thick recording sound and crew of world class musicians, but also finely crafted music-wise, where the singer songwriter’s skills are demonstrated by the creation of a unified musical and lyrical concept of romanticism. Álvarez’s voice makes one think of legendary Cuban troubadour Pablo Milanés, but in a kind of contemporary version: an updated Cubantrovador, renovating one of Cuba’s most influential popular musics.