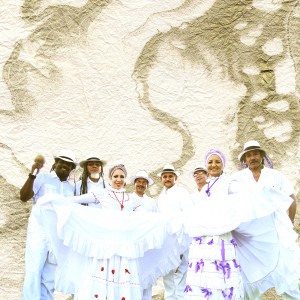 Hijos De Agüeybaná spreading bomba
Agua Del Sol is the debut album of Hijos De Agüeybaná, however the band has been performing on stage and conducting workshops for more than a decade. Led by Otoqui Reyes, this 8-piece ensemble is committed to preserving their Afro-Caribbean heritage by researching their roots. Barril-Primo is played by Otoqui Reyes and his father and bomba guru Ángel Luis Reyes, subidor is played by Ramon Vazquez and Papo Aguilú while Naomi Vasquez, Minerva Rosa and Quique Hernández form the singing section of the group

The eternal vibration of African rhythms has enchanted the world. During the last years, more and more styles of music related to African percussions are coming to the fore – just think of kuduro, kizomba and afrobeat among others. Within this upsurge, Afro-latin music has been greatly exposed from Cuban and Afro-Peruvian artists to Colombian cumbia andlabels like Soundway, which specialize in tropical sounds. Now, it is the time of the Puerto Rican African community’s own music, Bomba, to reach all those world music lovers.
‘Agua Del Sol’ is loaded with percussions and group chanting, like in constant dialogue, a style of tribal origin. The multi-layered, recurring beats reinforce the message of the melodious voices and vice versa, delivering celebrated mantras to solidarity, community-life and local culture. Compared to its African counterparts, Bomba music is less rough, emphasising more the vocal harmonies and restricting tempo changes and rhythm shifts within a song.
Bomba – the language of freedom in times of slavery

Bomba, like it happened with other styles in other parts of the Americas, became the unique form of expression of the black slaves that were transported all the way from Africa to work in the sugar plantations of Puerto Rico. Working in slavery under dreadful conditions the ‘Bomba rituals’ (like during St. James festival) helped the people stay together and retain their African identity in the ‘new world’. Bomba’s drumming and dance became the common thread not only among all those different African peoples speaking different languages but also across generations to pass on the knowledge of rhythm and history to the youth.

This music thrived in communities like Ponce, Guayama and Loiza Aldea even after liberation and is still played with one large percussion, called buleador (or barril-primo) and a smaller one called subidor while it is accompanied by all sorts of rhythmic instruments like maracas and sticks thus three or more layers of percussions are woven together. However, buleador plays the main role of interacting with the dancers in a continuous ‘conversation’, where musicians and dancers challenge each other. Bomba is based on musical and lyrical improvisation, or ‘controversia’, which is the heart of much of Puerto Rican folk music. Songs often start with a ‘liana’, where the main singer is reinforced by the chorus in a call and response fashion before the drumming begins. Bomba groups are used to go from place to place performing in open air sessions on the beach, on the streets etc. in all night long rum-fueled sessions.