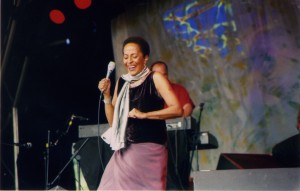 Susana Baca on the Jazz stage during his 2008 Glastonbury Festival, UK

Our congratulation goes to Susan for her appointment as minister of culture, a long over due post for Peruvian cultural heritage. I do hope she pays attention to the indigenous people with their ever vanishing music, culture and their language. Only yesterday I had a call from one of my god children “Carlos LLamoca” in Cusco saying “padrino”, which is me “could you email Susana before she comes to Cusco next week and ask her to address our problems and try to promote our handicrafts particularly our Inca design jewellery and wear. I did email Susana and I hope she will respond to my friend’s request and other artisans which are similar to Carlos.

Susana Baca became popular and better known after Tumi Music secured a Grammy with our release of her album Lamento Negro (tumi CD 104-2001). Following her Grammy achievement Susana returned to Lima airport with the previous president putting red carpet upon her arrival. She went on to sell thousands of CD through National papers in Lima and most probably made her first fortune. Ironically she never thanked Tumi Music for all that but that is another story..
and when I met up with her in her dressing room in South Bank she apologised for her rather odd reaction towards her |Grammy.
Now read more about Susan’s life here and if you have not heard Lamento Negro then you can listen to it by going to www.tumimusic.com

“Born in Chorrillos, a black coastal barrio of Lima, Baca grew up surrounded by Afro-Peruvian music in its various forms, including the percussion-driven festejo; the melancholy, more melodic landó; and the “mother of them all,” as Baca tells me, the golpe tierra. At that time Afro-Peruvian music, with its history in slave culture, went unrecorded and neglected by mainstream culture. “Before, the record companies wouldn’t pay attention [to us], at least in my case they wouldn’t play us on the radio, much less on television.”

As a student, Baca became interested in researching the roots of her musical heritage, using her work as source material for her career as a professional singer. Eventually, she won grants from Peru’s Institute of Modern Art and the National Institute of Peruvian Culture. More recently, she and her husband, Richard Pereira, founded the Center for Black Continuum, dedicated to promoting black music and dance.
“I’ve gone all over Peru,” she explains, “recording in rural areas, gathering material from old singers, composers.” On her debut album, several of the songs, generally the more African-sounding, percussive numbers, have centuries-old roots, including “Énciéndete Canela,” “Zamba Malató,” and the aforementioned “Molino Molero,” which is based on a scrap of music originally discovered by an American ethnomusicologist.

“He didn’t even record it,” she recalls. “It was just a transcription. An elderly man sang it; he remembered hearing it sung by a woman who had been a slave. He just remembered this small piece, and from that we built the entire song.” Baca smiles, and she sings a bit of it. “You note the cultural mix (mestizaje) in the song,” she points out. “It has some Andean chords in it.” Such musical archaelogy can also be painful, though, bringing fresh realization at how much has been lost, at how few of the old musicians are still alive. Sometimes, too, the ones who are still living prefer not to be reminded of the past, and refuse to be interviewed. “We’ve lost so much of these roots, because the old don’t want to remember; they’d prefer to forget. ‘No,’ they say, ‘that was from slave times.’ ”

Despite her emphasis on roots, Baca wants to make clear that she is not producing the equivalent of a folk music museum. She rescues, but she also reinterprets and contemporizes. “There are traditional things that we do, but our interpretation is different. There are more risks in what we do.” Her album includes a number of contemporary compositions, and one can identify elements of jazz and even rap.

She has also worked with a number of contemporary poets on lyrics, of which she is justifiably proud. One example is “Heces,” a spare guitar-and-vocals track on her album whose words are from a poem by celebrated Peruvian poet Cesar Vallejo. “It’s about a man who is from the Andes,” says Baca, “where there is always sun. He comes to Lima to live, where there is a permanent mist over the city.” Vallejo’s first lines are ones that this Seattle resident highly appreciates: “This afternoon it’s raining like never before/And I no longer feel like living, my love.”

Live, Baca gives a performance that is as much visual as aural. Her voice, actually, is a bit disappointing, as rich and expressive as you’d expect from her recordings, but less powerful live. But the sum total is still stunning. She dances, usually barefoot, as well as sings, gliding across the stage with utter self-confidence. She is backed by David Pinto on bass, Rafael Muñoz on guitar, Juan “Cotito” Medrano on the all-important cajón, and a small, fast-moving man named Hugo Bravo who does time on all the other traditional percussion instruments needed to crank out the peculiarly intriguing rhythm of Afro-Peruvian music, kin to the Afro-Cuban son’s three beats against two, but usually played in 6/8 or 12/8 time.”