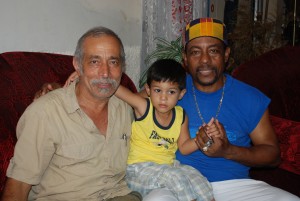 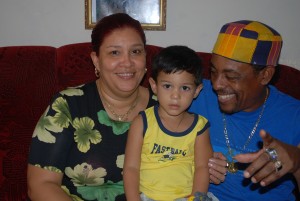 Candido Fabre and his family in his house in Manzanillo, Cuba 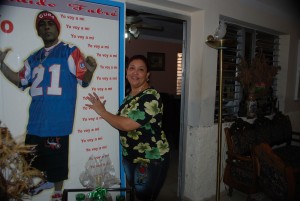 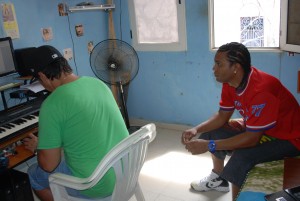 Travieso “Candido Fabre Jr.” during his recording session in the bedroom of their house in Manzanillo, Cuba. October 2012[gallery orderby="rand"]

It is midday on Friday 19th October.   As I sat In Candido’s house in Manzanillo ,Conchita (Candido’s wife) kindly served us with my favourite food of all time;  Rice, Beans and freshly caught fish.

All morning I had been sitting  next to Travieso (Fabre jr.) in his studio/ bedroom and listening to the new recording that he has been putting together for the last year or so and now it was a relief to be away from the blasting sound of music for a while.  The house felt  more like Piccadilly Circus than a house with people coming and going and the news was coming in that Candido was finally getting up.   In the sitting room there were people queuing for interviews, video work..etc and meanwhile all the instruments had to be shipped from Manzanillo to Bayamo for the night event which quite to my surprise sounded a much bigger event than I had thought.

Eventually I finished eating and Candido came down, after a big hug I left him to his interviews and went to the studio putting some trombone to one of the  Travieso’s song.

When we finished everything was rather quiet and once again the house converted back  into a family gathering with Candido Fabre’s grandson  from his daughter Muñeca  and his wife Conchita .  As we sat around we took lots of photos and talked about how 19 years had disappeared just like a night.

I still clearly remember, our daughter Nina was around one year old and we had gone to Cienfuegos for our holiday.  It was early in the evening and I could hear music in the street.  I left my wife Lucy and Nina in the hotel and walked towards a crowd of people.  As I ploughed my way through mountains of people I saw this young charismatic black singer  communicating with his audience as I had never seen before, he was indeed improvising rather than singing. He went on for hours and I knew that he was very special indeed. As I had to go back I pushed myself behind the stage and left my name and Tumi Music details to his violinist who had come back for a glass of water and asked her the name of the singer and she said ” Candido Fabre” and I said please let him have my card and that moment was the start of a long and respectable relationship between one of Cuba’s greatest singers and myself and Tumi Music. We went on to record 4 CD’s, and he toured UK and mainland Europe more than a dozen times. Today I consider Candido more as a member of my family and a good friend rather than a musician on my label “Tumi Music”.

On the evening of Friday 19th. October 2012, we all turned up to Bayamo.  As we approached the venue “El guajiro natural” the police were chaining off the entire area. I was driving with Carlos who had been accompanying me during the journey on the Island. I drove towards the barrier and introduced myself with the passport in my hand. The officer in charge soon removed the barrier and provided us with a parking space. I was accompanied to the back stage when Candido Fabre received us  with lots of hugs and smiles.

We went to the back where special seats were reserved for us, but I wanted to be at the front and  after saying hi to many people I left the table and went to the front.  Arturo Jorge, the trova band was finishing their last song . They sounded really amazing too.

When the band finished Candido eventually appeared after his band played the first two songs and there they were all Candido’s old favourite hits as well as some new ones among them some of my favourite songs ” La Habana quiere guarachar contigo” and ” De Cuba vengo y Cubano soy”.

It was a truly memorable evening that I will never forget.

We stayed until the last song and then knowing we had a 10 hour drive to Habana, we left quietly!